How much do entry level UX designers make?

Since UX is a relatively new field, and user experience people work in a vast number of settings, the answer to this question can vary greatly. That said, there is some data that has been collected over the past ten years or so. The VCU Brandcenter releases an interesting report each year, as does the UXPA (User Experience Professionals Association).

The best source of salary data for user experience continues to be the UXPA. The 2022 salary survey shows that the median salary for those with zero to two years of experience rose to $73,680 (vs. $63,000 in 2018; see below).  The report notes that, as shown in previous years, there is a linear pattern of years in the field and salary. Respondents with 21+ years of experience make at least 6% ($9k) more annually than those with 20 years of experience or fewer. They also note median salaries overall increased by $8,743 (+9%) since 2018 after factoring in inflation. The inflation adjusted median salary hasn’t changed much since 2005.) You can read the full report here [PDF] 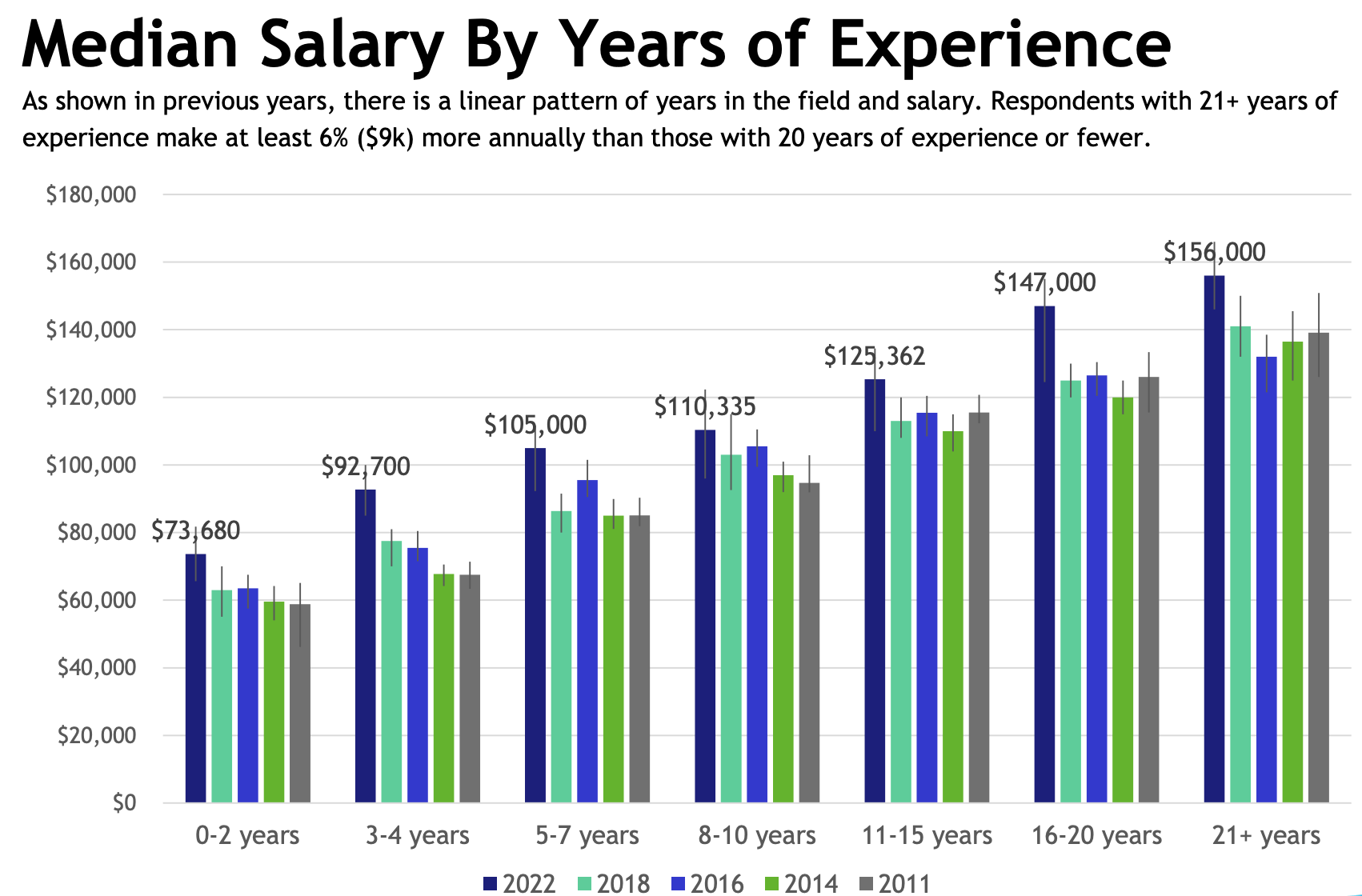 $80,027 was the annual average salary for recent UX grads with a two-year master’s degree in 2021

The Brandcenter 2021 Salary Survey shows that a master’s degree seems to pay off in the Experience Design field — junior designers reported average earnings of $80,027. This represented roles in both full-service agencies, brand agencies, consultancies and digital-specific agencies.

The best source of salary data for user experience is probably the UXPA, User Experience Professionals Association (formerly the UPA). They have published an annual salary survey since 2000 making it one of the most consistent sources of data available (the UPA has been around since 1991). According to 2018 data, if you had 0-2 years of experience, you could expect a salary of $63,000. If you had 3-4 years, you could expect more in the $77,500 range. (Interestingly, these numbers seem to be consistent with the Brandcenter junior level number of $71,000; graduates there would have two years of experience). 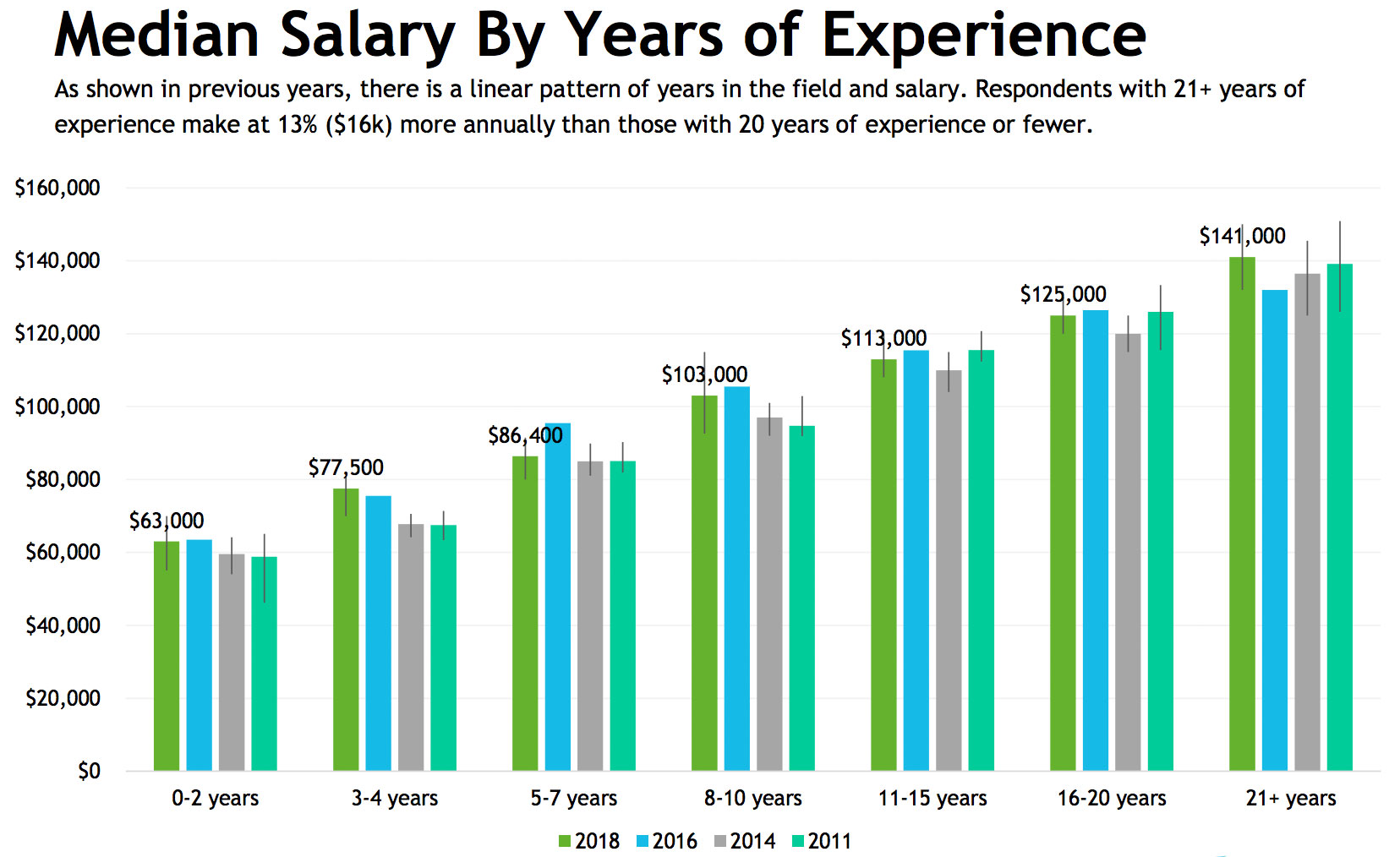 $71,091 was the salary for experience designers with a two-year degree

The average starting salary for experience designers is $71,091 according to the Brandcenter survey [PDF in new window]. This is higher than the other agency jobs, copywriting ($54,859), art direction ($59,963) and Creative Brand Management ($58,313). This is consistent with that I’ve observed over the years. Since UX tends to be a slightly more technical role, starting salaries are a bit higher than the pure “creative” roles of art direction and copywriting (where the competition is especially steep). It’s also important to note however that later in your career, the top creative director roles will outpace UX directors in terms of salary. So UX tends to be a slightly “safer” bet in terms of salary band. Overall, the numbers in this survey are likely higher than the average, since these starting salaries are for graduate students coming out of a two year program with competitive recruiting.

Entry-level UX salaries have dropped, while pay for experienced staff has been more stable

According to data for the Nielsen Norman Group on average, current entry-level salaries in 2019-dollars are about $67,000, and UX staffers with 5 years’ professional experience earn about $95,000. (Salaries are lower outside the United States.) The $6K/year experience premium applies during the first 5 years of a UX professionals’ career. Later, the premium drops to $3K/year. This is reasonable, as the biggest performance gains come in the early years, when newly minted user experience specialists are disabused of bad habits from university and learn how to actually do the job in industry. For the vast majority of employees, all income growth happened between the ages of 25 and 35. On average, income at age 55 was the same as income at age 35. Only the top 2% experienced salary growth after age 45.